Microsoft yesterday release Build 14977 for the Windows 10 Creators Update, but only for mobile on the Fast Ring. The company said that they will not be releasing a PC build this week because of a blocking bug may break apps after an upgrade to a new build.

Microsoft Insiders on Windows Phone 8.1 and Windows 10 Mobile now have access to download the new build to their devices and test out the new features. We’ve outlined the key enhancements and fixes on the new build 14977 below.

On November 17 Microsoft released Windows 10 Preview Build 14971 for PC in the Fast Ring. One of the features they brought to that build has now been made available on this new mobile build. 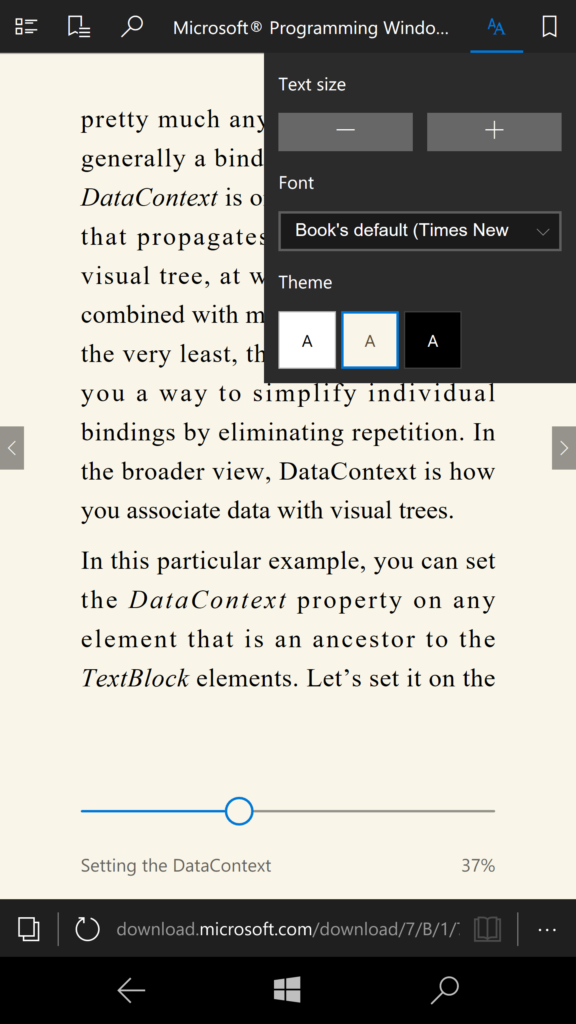 Basically, it allows you to read unprotected EPUB files with Microsoft Edge, the Windows 10 browser that claims to be safer than Chrome or Firefox. The same functionalities have been ported to the Windows 10 Mobile experience on Edge. You can control the text size and fonts, choose from three theme options, leave bookmarks, search through the table of contents and even ask Cortana to define words for you.

There are also several sources that Microsoft showcases from where you can download and read unprotected EPUB books, such as Microsoft Press, Open Library, ePub Books and Free eBooks.

For apps developed on the Universal Windows Platform, Microsoft is now using a new rendering technology, so they’re soliciting feedback for any visual glitches experienced on the new build.

Based on feedback from app developers, third-party alarms can now break through during Quiet Hours that you set with Cortana. They’ve also removed the top-level Notifications option for all apps. You will now have to do a per-app setting to allow alarms to work on locked devices. Microsoft found that users were accidentally stopping all alarms without realizing that they won’t be able to wake the phone when it’s locked.

Microsoft has now brought in OAuth for Yahoo Mail accounts so users can securely check their Yahoo emails, while enhancing the reliability of syncing your emails.

Improved continuity of audio when unplugging and plugging in a wired headset when watching a video. Fix for music apps that would sometimes stop playing after the first song. Fix for Microsoft Edge where a re-opened tab would have the URL in the address bar but the page would be blank. Fix for Start Settings not rendering on an external monitor using Continuum. Several translation fixes – ongoing effort. A few other fixes have been introduced for the Action Center and Camera app as well.

Here’s What NOT to Do

Microsoft urges Insiders not to install any new language, keyboard or speech packs on the new build. If you still want to do this, you need to roll back to Windows Phone 8.1 or Windows 10 Mobile, install what you need and then update to the new build. The company also warns about installing the build on Windows 10 devices with 8G internal memory, such as Lumia 550.

For a full description of all the new features and fixes on the Windows 10 Creators Update Build 14977 for Mobile, you can visit the Windows blog page.

If your device is still not on Windows 10, here’s how you can still get a free upgrade to Windows 10.

Learn How to Upgrade to Windows 10 for Free

Thanks for reading our work! Please bookmark 1redDrop.com to keep tabs on the hottest, most happening tech and business news from around the world. On Apple News, please favorite the 1redDrop channel to get us in your news feed.