Currently, we received a report from an Insider that he got the error PAGE_FAULT_IN_NONPAGED_AREA when upgrading to Windows 10 build 14915 on two different computer (PC). 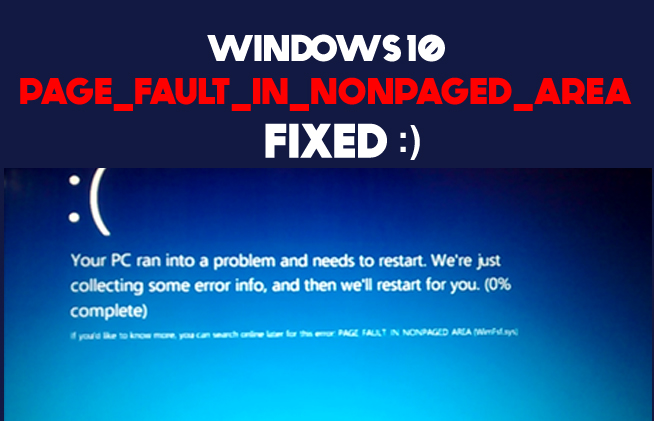 He said:
“I’m on the Windows Insider fast ring, and Windows is failing to update to build 14915 with the same error at the same point on two separate, completely different machines. I get a blue screen after the reboot at 75% saying PAGE_FAULT_IN_NONPAGED_AREA in win32kbase.sys. I’ve tried it a few times on both machines, and most of the times (but not always) I even get the same blue screen once more after a reboot, after which the update is rolled back and I’m back at the previous build (14905).
I’m surprised more people aren’t seeing this, as I have the exact same problem on two different machines, one a brand new gaming rig, the other a three year old laptop. How is it possible that it would fail in the same way at the same point on two unrelated machines, yet apparently most people can update fine?
One thing I’ve tried after finding some clues online is setting the page file to manual instead of system managed, but that made no difference.“

If you got the same problem with him, please let us know your PC model, also the Windows version it’s running (such as: 32-bit or 64-bit), our support engineer will help you to solve it.
If it’s urgent, please read some guidelines provided by our technical support to help yourself:
—->
What virus program are you running? as 3rd party virus programs are known to cause issues, also anything plugged into USB except KB/Mouse has been known to cause problems. Without any details about your systems it’s the best info that I can give you. Also found this info by Googling the error:
win32kbase.sys errors can be caused by: